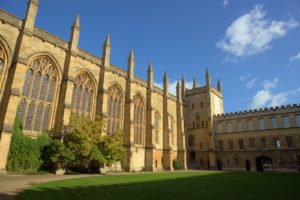 New College was established in 1379 by Bishop William of Wykeham. The official name of the college is “The Warden and Scholars of St. Mary College of Winchester in Oxford, commonly called New College in Oxford”.

As one guide puts it, “it is one of the largest and best known colleges, and undeniably one of the most beautiful”. New College has some of the largest and most beautiful gardens in Oxford; it is also famous for its medieval cloisters. The dining hall is the oldest of any Oxford or Cambridge college. Over the centuries, Britons who became leaders in all walks of life studied at New College. The faculty is particularly distinguished, having five scholars who are either Fellows of the British Academy (for leading scholars in the humanities) or Fellows of the Royal Society (for leading scholars in the sciences). The faculty also includes nine professors (in Oxford there is usually only one Chair – professorial title – in each subject). Last year New College had the largest number of graduates earning first class degrees.

The College admits both men and women and there are now over 360 undergraduates and over 125 graduate students. Students say that because of the large size of the college (by Oxford standards) most interests are represented and the student body is both diverse and very friendly. They have always given a warm welcome to American and other overseas students. (OSAP has worked with New College since 1988).

The University prospectus notes that “the College offers a full range of sporting facilities.” There is a riverside sports field with a pavilion and squash courts.

"The academic program was excellent. The OSAP administration was great. OSAP events were well planned, and it appears that OSAP gives us more privileges, access, etc. to the University than other programs."

"My academic program was excellent. Much more work than expected. My law and ethics course was amazing--definitely worth the work...I wrote 13 essays!"