Oriel College is a medieval college within the University of Oxford. Located in the High Street in the very centre of Oxford, the college is one of the oldest in the University (founded in 1326). Notable alumni include the historian A.J.P. Taylor, former Archbishop of Canterbury Thomas Arundel, Sir Walter Raleigh, Thomas More and John Henry Newman. 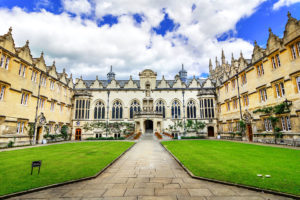 typical enrollment of around 300 undergraduates per year, Oriel is one of the smaller colleges in the University. It consistently ranks in the top 10% of Oxford’s academic league tables.

Oriel’s relatively small student body contributes to an inclusive and friendly atmosphere within the college, sustaining a close-knit and vibrant social environment for both undergraduate and graduate members.

Oriel is especially renowned for its world-class teaching in the humanities, particularly History, Classics, Philosophy and Theology.

The History of Oriel College (from https://www.oriel.ox.ac.uk/about-college/college-history):

Visitors often ask about the name of Oriel College. Soon after the foundation in 1326 the ‘College of the Blessed Virgin Mary’ was given a property called ‘La Oriole’, on the site of the present Front Quadrangle, and gradually the college came to be called by that name.

Oriel was the fifth college to be founded at Oxford. It began with a Provost and just 10 Fellows, all graduates, who studied Theology, Law and Medicine. The college prospered and grew. Three Provosts went on to become Bishops. Life was not entirely peaceful, though. There were religious controversies, and occasional violent quarrels.
At some time in the early 1500s the first undergraduates arrived. Oriel survived the turbulence of the religious Reformation. By the end of the century more space was needed. Between 1620 and 1642 the mediaeval buildings were replaced by the present Front Quadrangle. It was finished in time to house some of the court of King Charles I while Oxford was briefly his capital during the Civil War.

Early in the 1700s one Oriel undergraduate referred to ‘frivolous lectures and unintelligible disputations’, and academic standards in Oxford remained low for most of the century. Oriel did attract its first transatlantic students, sons of planters in Virginia. One of them came to regret giving a job to a young surveyor: George Washington. Oriel expanded into a second quadrangle and built the fine Senior Library to house a large gift of books.

From 1780 to 1830 or so Oriel led the way in reforming academic standards in Oxford and in a religious revival, the Oxford Movement. The Oriel Fellowships were thrown open to competitive examination and many great names arrived, among them Dr Thomas Arnold and John Henry Newman. By the late 1800s, however, Oriel was better known for prowess at rowing, football and cricket than in final exams.

Oriel remained subdued during the much of the 1900s, affected by two World Wars and the Great Depression, when the last estates were sold. But from the 1980s on the story is one of growth, boosted by the admission of women in 1985. At the time of writing in 2011 there are nearly 50 Fellows representing an astonishing range of academic disciplines, 300 undergraduates and 200 graduate students. Oriel is already looking forward with confidence to the celebration of its 700th anniversary in 2026.

Oriel College: A History, by the late Jeremy Catto, a former Fellow, was published in November 2013 and was the first history of the College to be published for over a hundred years. It is an account of distinctive society, the college of Thomas More, Walter Raleigh, Gilbert White, Thomas Arnold and John Henry Newman, written by a group of specialist scholars who aimed to place the body of Orielensis in the context not only of Oxford but of British and international history.

It is more than a domestic history of the college; it explores the ideas which have animated, and often divided, the members of the college in every generation since 1326, especially during the brilliant Noetic era of the early 19th century, and the Oxford movement which succeeded it; and it considers the impact of Oriel on national life, including sport and the government of the British empire.

The OSAP overseas program in Oxford hosts the largest number of students each year.

"The academic program was excellent. The OSAP administration was great. OSAP events were well planned, and it appears that OSAP gives us more privileges, access, etc. to the University than other programs."

"I would say OSAP is better because there is more integration with British students and a better safety net. Plus, the housing is better."